I received my Ph.D. in Developmental Psychology from the University of Pennsylvania. I am the founding and current Editor of Language Learning and Development, former Associate Editor of Developmental Psychology and Applied Psycholinguistics, and current Associate Editor of Cognitive Science and Gesture. I was President of the Cognitive Development Society and am currently President of the International Society for Gesture Studies, a member of the Board of Directors for the Association for Psychological Science, and secretary of the Society for Research in Child Development. I served on the Advisory Council for the National Institute of Deafness and Other Communicative Disorders at NIH and was elected to the American Academy for Arts and Sciences in 2005.

A year spent at the Piagetian Institute in Geneva while an undergraduate at Smith College piqued my interest in the relation between language and thought, interests I continued to pursue in my doctoral work at the University of Pennsylvania. At Penn and in collaboration with Lila Gleitman and Heidi Feldman, I began my studies exploring whether children who lack a (usable) model for language can nevertheless create a language with their hands. We have found that deaf children whose profound hearing losses prevent them from learning the speech that surrounds them, and whose hearing parents have not exposed them to sign, invent gesture systems which are structured in language-like ways. We are currently studying these so-called homesign gesture systems around the globe. This interest in how the manual modality can serve the needs of communication and thinking led to my work on the gestures that accompany speech in hearing individuals. We have found that gesture can convey substantive information –– information that is often not expressed in the speech it accompanies. Gesture can thus reveal secrets of the mind to those who pay attention. Moreover, we are currently exploring the ways in which gesture goes beyond revealing speakers’ thoughts to play a role in changing those thoughts.

Goldin-Meadow, S. The resilience of language: What gesture creation in deaf children can tell us about how all children learn language. N.Y.: Psychology Press, 2003. 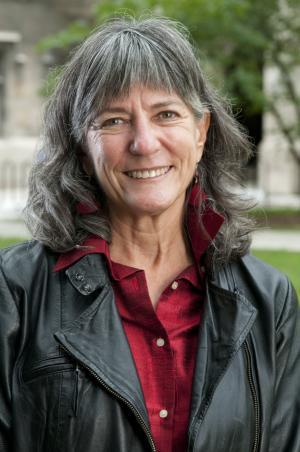